Please scroll down and view the micro profiles of all the members of The London Guild of Toastmasters. Every member has completed the necessary examinations and interviews to be admitted as a member of 'The Guild' and through this membership they all carry full public liability insurance.

Members cover different areas of the country so please click on the links in their profiles to be taken to their own websites and to contact them. 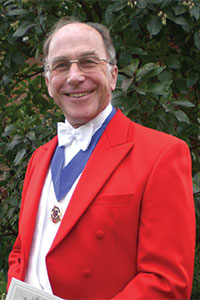 After all the excitement of planning your wedding, why leave everything to chance on the day itself? Inviting me to manage your wedding will ensure that you and your guests relax and fully enjoy the occasion.

I will add that extra 'something' to the day and ensure that your plans and dreams come true.

I am available to officiate at events throughout Sussex and Surrey. 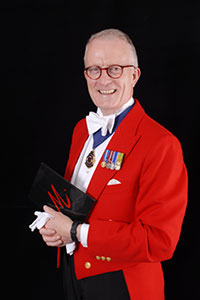 Andy Bignold is a Toastmaster of long standing and vast experience. His professional career tells of a man organising events from the seemingly humble to the most grand and magnificent. Most events where he wears his Toastmaster uniform fit somewhere in the middle.

He will help with planning and be invaluable on the day when delivery will be timely, polite, firm, fun and mindful of the specifics of each audience.

Delegation of responsibility is easier if you trust the person. Andy exudes confidence and calm, he retains the enjoyment whilst maintaining the timekeeping and agenda. 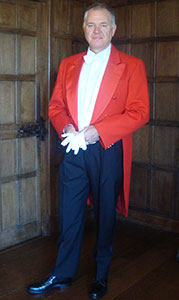 I am John Bozier, your Toastmaster, Master of Ceremonies, Public Speaker, MC, Host, Compère and Coach. I provide the finshing professional touch to your event. These include Asian & Traditional Weddings, corporate trade days through to Charity Galas and Award ceremonies.

Let me help make your complete event everything you wish it to be - from planning through to the delivery on the day, you are in safe hands. 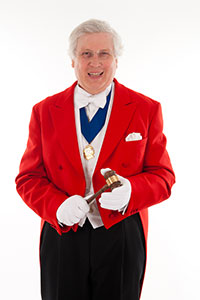 By choosing me as your Toastmaster for your special occasion, you can relax and rest assured in the knowledge that your occasion will be safe in the experienced and capable hands of a true professional.

As a Toastmaster I have officiated at a variety of functions including wedding receptions, charity dinners, fundraising events, Civic dinners and a variety of corporate functions and AGMs. I have also been invited to officiate at civil ceremonies, including same sex occasions and other important family events. I trained as a manager in the hotel and catering trade working in a number of top London restaurants and hotels. One of the most important things I learned during this time was to provide the best possible level of service at all times and to do so with a smile and to exercise complete discretion at all times when dealing with customers from every walk of life.

Something different - Sabrage – the opening of Champagne with a cavalry sabre! I am trained in the art of Sabrage and licenced to Sabrage Champagne safely. I am affiliated to the Confrerie du Sabre d’Or and a Comandeur of the Order. Sabrage goes particularly well at a wedding reception just before the cutting of the wedding cake by the bride and bridegroom - the happy couple can also use the sabre to cut the wedding cake. 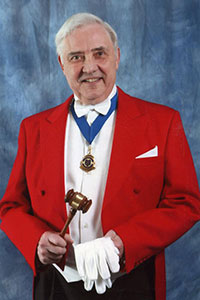 Robert Civil has been a Professional Toastmaster since 1980. During that time he has officiated for Royalty, High Government Office, Local Government at County and Borough levels, Masonic Ladies Festivals, Rotary Charter Nights, Weddings, Corporate and Charity functions.

Always ready to assist with any advice, Robert is noted for his friendly and efficient manner at any function at all levels.

The main areas where Robert works as a Toastmaster are Northamptonshire, Leicestershire, Oxfordshire, Warwickshire and Cambridgeshire. 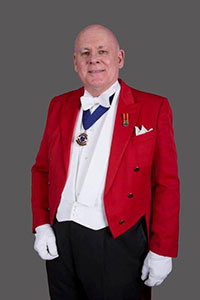 Roger Davey F.V.C.M., M.G.T.(Lond.), member of the Association of English Singers and Speakers. Fully trained and experienced Professional Toastmaster and Master of Ceremonies.

Friendly and adaptable style. Happy to have a brief chat without obligation.

Based In North Kent and ideally located for London and the Home Counties.

Happy to travel - Any event and location considered. 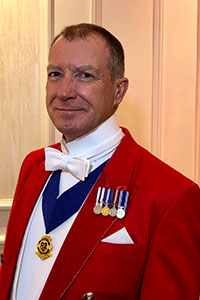 Tony’s personal view of the role of a Toastmaster is to liaise with, advise and assist where required, the event organisers to ensure the smooth running of the function. Their wishes at all time being paramount.

An experienced Toastmaster of many years, having officiated at different kinds of events from large corporate events to small intimate family functions, Masonic, regimental, civic, charity dinners and weddings of many different religions, beliefs and cultures. 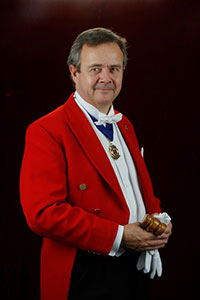 Nick is a Toastmaster based in the London area, but his work takes him all over the U.K. and abroad.

As a member of The London Guild of Toastmasters his work needs to be of the highest standard, providing decorum, organisation and pomp at all kinds of functions. This doesn't mean that he will make your function or event dry, serious or unenjoyable. His main aim is to provide the guidance and help to ensure that your event runs to the agenda and timeline, without stress and with as relaxed an atmosphere as possible.

Many visitors to this website (and Nick's site) will be searching for someone to help them at their wedding. Nick's advice is simple; "It's going to be the most important day of your life (so far), so you need to find someone you trust and like. Talk to your Toastmaster, you will know when you've found the right one!" 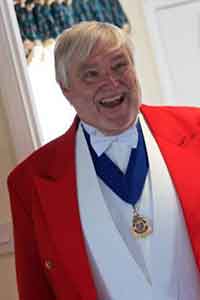 Stephen has been a Toastmaster since 1989. He attended The London Guild of Toastmasters "Class of '92" course managed and led by three doyens of the Guild, Dudley Walters, David Marshall and Harry Matthews. Stephen was invited to become a full member of the Guild in 1996 and was president just 10 years later to the day!

Stephen is the Toastmaster of choice for the prestigious 'Elite Hotels' group and also for the Nutfield Priory Hotel. Stephen has undertaken the Toastmaster's duty at many different events and has often worked with Royalty.

'Formality Without Fuss' is Stephen's motto. 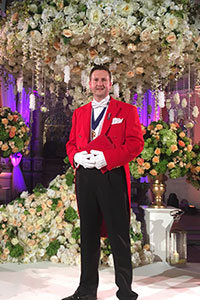 Stuart has been a Toastmaster since 2007. His modern style makes him extremely popular with the best venues and caterers in London and surrounding areas, for all types of weddings and events.

Organising an event is stressful and expensive. Make sure the money you have spent for the big day doesn’t go to waste and invest in an experienced and professional Toastmaster. I’ll ensure you and your guests will have fun! 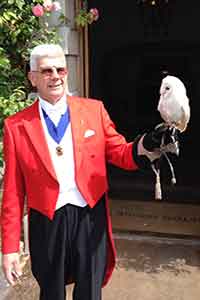 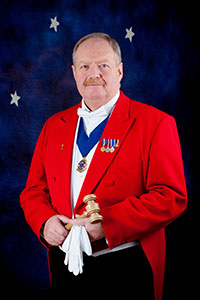 David was trained by The London Guild of Toastmasters to their prestigious high standard in 2007. Since then he has worked in many large and exclusive venues all over the South of England and the Midlands.

Having a keen interest in protocol and etiquette and with a cheerful and out-going personality, he can be as formal or informal as you wish. His reputation has been built upon giving the clients exactly what they require. Being able to give useful advice prior to any event, and with his knowledge of protocol, that can be invaluable in planning events varying from weddings, dinner dances, Masonic events and award ceremonies to anniversaries.

Discuss your needs and arrangements and create a tailored plan, so your day is perfectly fitting for you both; your guests will feel at ease throughout the day, having David guide them, so all present can relax and enjoy your special occasion. Located centrally-placed in the South of England, travelling to any given venue is not a problem. 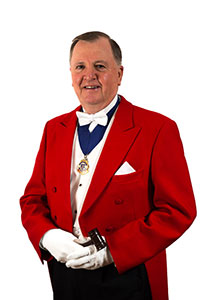 Robin is an established Professional Toastmaster and Master of Ceremonies and has been a full member of The London Guild of Toastmasters since 2007. He is based at Abbots Langley, near Watford and his duties generally take place in Hertfordshire, Bedfordshire, Buckinghamshire, the Home Counties and Central London.

Robin has a great deal of expertise at weddings of different religions and cultures, his aim being to see that all the hard work put into the preparation of a wedding runs according to plan, thus allowing the Bride & Bridegroom and their families to relax and enjoy the day. He promotes a friendly atmosphere which contributes positively to making the day special and memorable for all concerned. 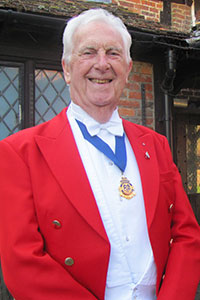 I have been in the entertainment business for over 50 years as a comedian, singer and compere, appearing at many leading venues throughout the U K. I have also appeared in many T.V. productions and commercials.

I qualified as a professional Toastmaster in 2002 and became President of The London Guild of Toastmasters in October 2011. I have officiated at top hotels and venues throughout the country for large and small groups and denominations, gaining a wealth of experience to ensure that your function runs smoothly. I will stage-manage your function, looking after the guests, assisting the photographer and liasing with the venue management to ensure that you enjoy your special event. I am always on call to advise on protocol and speeches etc. 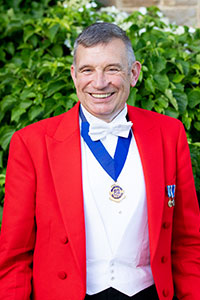 Peter trained with The London Guild of Toastmasters in 2005 and became a full member two years later having completed the extensive and rigorous training scheme. Since then Peter has had the pleasure of working for many different clients and venues over a wide area.

An experienced and proficient practitioner repeatedly engaged to officiate at functions ranging from small intimate gatherings to large corporate occasions, his passion is making your event run as you want it to.

Although based in Hampshire, as a result of the work he has done for clients and through personal recommendations, he is now asked to travel extensively across the Home Counties, Sussex, Surrey, Kent, Dorset, Essex, Wiltshire, Berkshire, Buckinghamshire and Oxford. He has travelled as far as North Yorkshire and even Melbourne, Australia. Read reviews from previous clients on his page in the suppliers section of Confetti or have a look at his website as detailed below.

Peter is also a member of The Toastmasters and Masters of Ceremonies Federation and a partner with the Toastmaster Partnership.

Additionally, and rather uniquely, Peter is licensed by the British Boxing Board of Control and able to officiate as a Master of Ceremonies at boxing events and functions.